I don’t generally participate in conversations on Facebook groups. Sometimes it’s because I find I have nothing to add to the conversation, other times it’s because what I’d say would be completely stupid. But the other day I stumbled upon a conversation over a topic that was very close to my heart. And I took two seconds out of my life to write a stupid little comment, not thinking much of it.

This is what I got in response:

that’s me calling her out on the personal attack

This was in the morning, and I spent the whole day thinking about this person & this comment as well as my reaction to it.

I would understand if this came from someone who knew me to be stuck up, who knew me to be insuffrable and just couldn’t take my insuffrableness (is that even a word?) anymore. I’ve been called out on that before. I’m fine with that. I mean, I’m not fine – it hurts and it’s not nice but at least I deserve it. But what do you think is going on in a person’s mind to call a complete stranger insuffrable? Someone you’ve never interacted with, someone of whom you’ve just seen post two comments on an already controversial subject? What makes a person start a personal attack instead of thinking “well, maybe that was a badly worded comment and they didn’t mean it”? I’m sure she had her reasons, but honestly? I don’t care. Once you make something generic into something personal, I have no respect for you.

Now, I’m in my thirties, supposedly a grownup. I’m supposed to be comfortable within myself, and I’m supposed to be able to brush shit like this off. I should be able to just go on with my life like nothing happened. And don’t get me wrong, I’m not changing because a keyboard warrior on the interwebs told me I’m a bit annoying. I report to the mods, block & move on. But just the mere fact that I’m writing a whole post about this must show that it’s playing on my mind, right?

I know that this shows more about her than it does about me. I know that I’m no stuck-up; a tad snobbish about certain things, but if anything, I always feel “less than” (let’s not get on it at this point…). Self-confidence is something I’ve always struggled with, and as much as I hate it, other people’s perceptions bother me more than they should. Which is why I spent the whole day thinking about this. Mainly, about what I did wrong and what I should do differently next time. Answer?

Was the comment badly worded? Maybe. But I still feel exactly the same way as I did before, and my opinion hasn’t changed. I’m always open to improving, but you’re not going to get it out of me by bullying me. You’re not going to get it by abuse, and you’re sure not going to get by making assumptions of a complete stranger over nothing. Have a conversation, ask questions, present your opinions and most important, respect other people. You catch more flies with honey than vinegar. 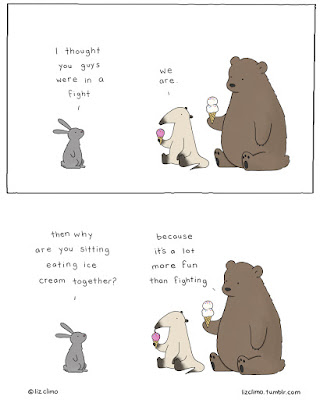 Copyright: Liz Climo
check her stuff out at lizclimo.tumblr.com! (link in pic, opens in a new tab)

Previous Post: « I’m supposed to be cleaning. So naturally I procrastinate…
Next Post: Ten on a Tuesday »