I think anyone who has ever lived with me can attest that I am one of the messiest people they have met. I’ll pick something up from place A, set it down in place C, move it to place Z and it will never pass Go and collect $200. Don’t get me wrong, every single thing in my house has a very specific place it should go to. The problem is that it hardly ever goes there, and then there ends up being this half-moon shape of pure chaos generally around where I’ve been sitting. Example in point:

And it happens all the time, without fail.

So, would you be surprised if I told you that I have OCD? Cos I do. On top of all my shortcomings, I have a very real issue with very real things.

I am clearly not one of those people who spend hours scrubbing their toilets so that you can eat your tea off it. Let’s face it, that’s never going to happen; I’m just too lazy for that. In fact, I’m quite comfortable if my flat is a complete tip. As long as it’s clean, it can be as untidy as it can be and I will be at peace. But every now and then, I get this “fantastic” idea of having a spring/fall/summer/winter clean which involves pulling every single item out of every single cupboard, cleaning said cupboard and cleaning said items. Which isn’t that unusual; people do this sort of thing I hear. But in my case, it’ll take days. You see, if the flat is 99% done, near enough perfect but not quite, I can’t deal with it. I will pace around the house forever if things aren’t just right.

As two working adults with shit to do, my husband I seem to find ourselves in a situation where other things get prioritised over cleaning. For me it’s the gym and studying, for him it’s doing his radio show and cooking. There just doesn’t seem to be enough hours in the day to dedicate to keep the flat pristine. So I thought about bringing a cleaner in. I mean, imagine coming in on a Friday after work and everything smelling nice and clean and stuffs… Heaven.

I have friends who are cleaners.

And as much as they’ll tell you they don’t judge the state of your home…. 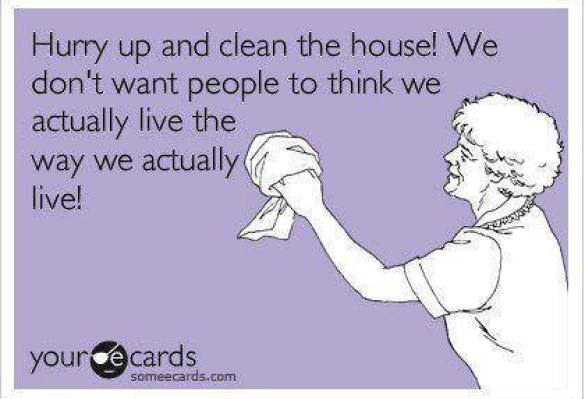 This is something my mother used to do, and I find myself thinking that it’s a very good idea. I mean, why on earth would you bring a stranger into your dirty piece of heaven and get them to clean your mess, only for them to gossip about it later?! Alas, the mess remains.

Until next Sunday. Because what’s a better way to spend a Sunday than scrub-a-dub-dubbing?

Previous Post: « I feel nothing and it makes me feel things
Next Post: Be kind to each other »